The trend now is that if a potential buyer does not have perfect credit they are less likely to even try getting preapproved.  If you know of someone who might be in this boat please forward this communication to them to let them know, it’s ok to try!  They might get a more favorable response than what they thought… 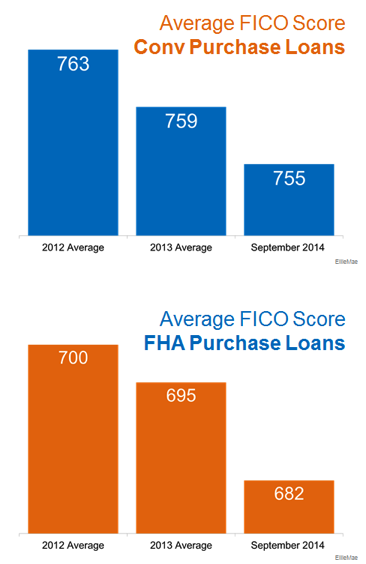 The reason there are more buyers out there right now – here is the mortgage credit availability. This is right from the MBA – the Mortgage Bankers Association. “The higher that number is, the more credit is available.” Now obviously, this number would be skyrocketing in, you know, 2004 and 2005, where anyone can get a mortgage. It’d be much higher than it is right now. But I took a look over since April 2013 all the way through this past month, and what we can see is that the availability of credit through a buyer is becoming easier and easier. Meaning even though, you know, we’re hearing things to the contrary, the actual mortgage that are available to a buyer coming in, the chance of them getting that mortgage is dramatically increasing. As a matter of fact, let’s break down some of the numbers.

Here are the average FICO scores on conventional purchase loans – people bought a house – this is the average FICO score. What was the 2012 average, the 2013 average, and what was last month’s average? What this graph shows us is that the average FICO score has steadily dropped from 2012 to 2013 to just last month. That’s important. What we’re showing is that we’re not back to the 660 and 640 scores, that maybe somebody got a mortgage in 2004 and 2005. And that’s good news we’re not there. But we’re not at the same levels, same restrictions, that we were over the last couple of years. I think we’re going to continue to see the FICO score drop.

And if we look at closed loans for FHA, we are down into the 600’s. In 2012, even for an FHA loan, the average FICO score was 700. Well now we’re down to 682. So as the credit becomes – not dramatically different – but as the credit becomes easier and easier to get for the buyers, there are more and more buyers coming into the market. And ladies and gentlemen, here’s another big step point to that.

A the last Mortgage Bankers Association conference just last month, Mel Watt, the director of the FHFA, which oversees Fannie Mae and Freddie Mac, said this:

“To increase access to creditworthy but lower-wealth borrowers, FHFA is also working with the enterprises (Fannie Mae and Freddie Mac) to develop sensible and responsible guidelines for mortgages with loan-to-value ratios between 95 and 97 percent.” What did he just say? Fannie Mae and Freddie Mac are going to be doing loans with as little as 3 percent down. Buyers are out there. Let’s keep them informed. Let’s let them know that they have a tremendous opportunity right now. And one of the things that they have to realize, they’re buying in one of the luckiest times in history regarding interest rates.